Do you want to introduce your product to a wider audience, but the prospect of Software Localization intimidates you? We don’t blame you! With technical, cultural, and linguistic elements to consider, software translation is highly complex. But if you are looking for a way to overcome the most arduous roadblocks, this guide to software localization best practices can help!

Software Localization refers to the adaptation of software to the language and the culture of the targeted user. This cultural adaptation is performed at the linguistic level, but also in terms of technicality including User Experience (UX), design, and layout. With all these elements working together, software localization helps you create a native product that feels as if it’s only ever designed for the end users in question.

We will dive more deeply into each of these steps throughout the blog and pair them with striking, real-life examples to give you valuable and actionable insights!

The Solution: Think Ahead and Internationalize!

Internationalization involves the preparation of your software for the localization process and removing all elements that refer to a single language application making it functional for multiple languages. Here is what that means in more detail.

First of all, internationalization will simplify localization for the User Interface (UI):

Your strings and data format should also be developed in a manner that makes localization easier. This includes: 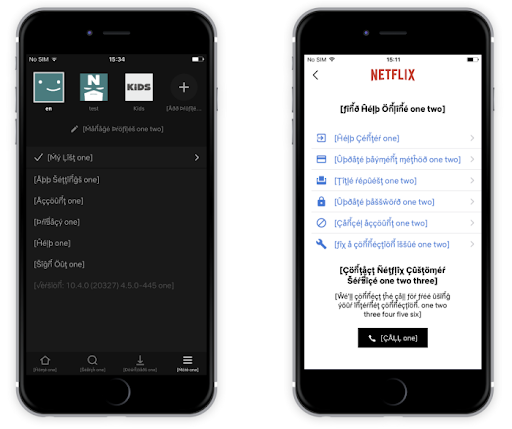 When it comes to the linguistic side of things, localization is about more than just language translation. You have to make sure you choose the appropriate regional version of the language, and the cultural references should be effective and respectful.

If you are in a situation where the language, as well as the culture, are not completely respected, you may just alienate your target audience rather than connect with them. Here is how you nail it!

The Solution: Rely on Native Experts and Linguistic QA

It is a challenge getting both the language and the cultural references completely right. Have a look at this scene from Netflix hit show Stranger Things, which is available in over 20 languages including English, Castilian Spanish, Latin American Spanish, Italian, German, Japanese, Brazilian Portuguese, and French. The official Stranger Things video explains “When language isn’t a barrier, great stories have the power to travel the world.”

The best way to ensure these kinds of powerful, accurate, and culturally savvy translations, is to connect with experts. These experts should:

To further confirm the quality of the translation, linguistic testing should be performed. Here, the spelling, grammar, cultural validity, and so on, are all double-checked for quality and compatibility with the culture the content is aimed at.

A fine example of top-shelf translations in the game and software localization industry is PUBG Corporation. The South Korean online game developer has a worldwide player base of hundreds of millions 2 and with games such as New State available in 17 languages.3 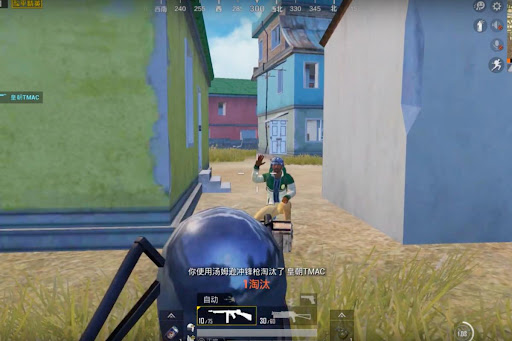 Part of what makes PUBG’s localization strategy effective is the considerations they have given to cultural sensitives as well as languages. For example, when their PlayerUnknown’s Battlegrounds was considered too violent for the Chinese market, PUGB commissioned a fully localized version of the game and renamed it “Game for Peace”.4 And while guns are still used in the game, the level of gore prevalent in the original game is no longer present.

3. So Many Things Can Go Wrong on the Technical Front

When not handled professionally, Software Localization can lead to a myriad of bugs and errors undermining the system. And one of these is caused by the above-mentioned text expansion. What if the developers did not apply internationalization effectively or were not very successful in their pseudo localization efforts?

Have a look at this example of a “Play Now” button. 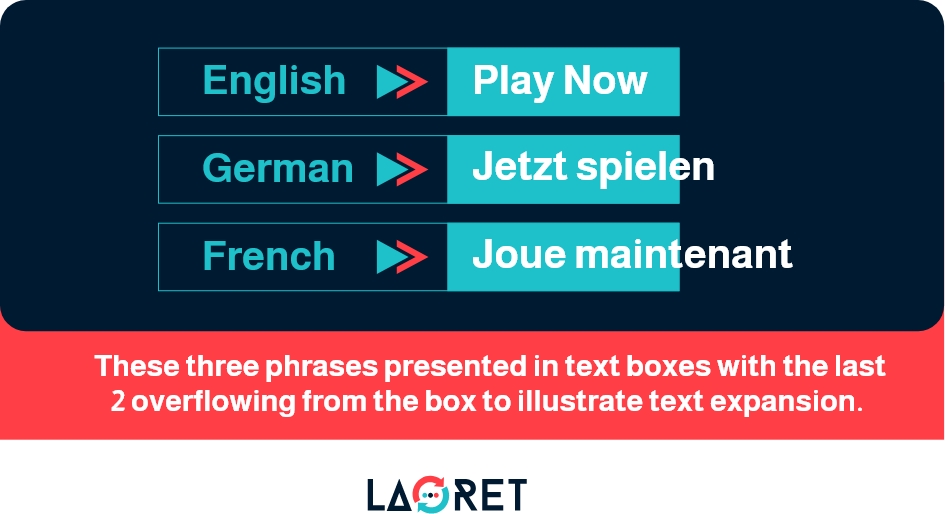 Text expansion such as this can wreak havoc with the software’s operating system. Visually, text expansion causes quite some issues as well. We will elaborate more on some other visuals in the next part, but when it comes to text expansion, text can appear truncated, flow outside of the boxes, or even overlap.

Beyond text expansion, other possible issues such as compromised code during the translation stage can contribute to bugs and errors.

If the internationalization stage hasn’t been effective in predicting text expansion issues, there are still ways to resolve them. This is where localization engineers and their sophisticated translation and localization tools have a vital part to play.

Translation CAT Tools are not only there to help make the translation process run more smoothly for the linguists. Localization engineers also leverage the tool’s Quality Assurance (QA) capabilities to deliver an error-free product. For text expansion, the following techniques can be used.

But there was another concern we raised. How can localization engineers ensure that the code will not be compromised during the translation process? Enter regular expressions!

Regular Expressions are implemented into the CAT Tool by the localization engineer. It identifies the content that should not be translated, or the code, and locks it so it cannot be edited. This non-translatable content will be displayed as a tag.

Have a look at this screenshot from one of our projects. Locking down the code (purple) means that linguists cannot accidentally edit these strings, and a wide range of possible errors are prevented in the process.

Finally, any software localization project must include functional testing. What does this entail? The software performance, code, text expansion, and more are tested and a smoothly running UI is confirmed.

Pro Tip! Localization engineers also streamline the software translation process and are in charge of ensuring that the extraction of the resource files, continuous localization efforts, and the reinsertion of the string back into the code, is also part of their tasks. Read all about it in our blog Software Localization Quality Assurance (QA): What Is It and Why Does It Matter? (not yet published on new website)

4. Visually, Software Localization is No Piece of Cake Either

Beyond the more technical issue of text expansion which can undermine the UX and make content appear truncated or too long, other visual elements can interfere with perfectly executed software localization.

RTL languages are rising in prominence and languages such as Arabic are becoming more important in the localization world. But this has also brought a visual challenge to it. As these languages are directed from right to left rather than left to right, the design will need to be adjusted to accommodate the new language while still maintaining the original power of the design.

Additionally, certain images, colors, and symbols might have to be replaced depending on the target locale. For example, if you intend to use specific gestures in your imagery, make sure you know which ones are appropriate to use.

While in the United States, for example, joining the index finger and thumb in a circle signifies “okay”, this is actually considered a lewd gesture in Brazilian culture.  In fact, the New York Times described the gesture as having “insulting and scatological connotations.” In the 1950s.5 Richard Nixon famously raised more than an eyebrow or two when he made the gesture when arriving in Brazil.6

Of course, we are not living in the 1950s anymore and globalization has led to different cultures understanding the meaning behind certain symbols, but the cultural connection will still be there.

When it comes to cultural relevance of the imagery you are using, here too native expertise will be vital. Beyond the linguists who will give you stellar multilingual content, local experts will also help you by providing you with insights into what your target locale appreciates, what their customs are, and what types of visualization will be sensitive.

For example, developers in China had created a healthcare app called Chunyu Yisheng which was intended for inhabitants of the more rural areas to easily interact with physicians. The application makes excessive use of green since Chinese culture associates this with harmony and health.7

So, what about those RTL languages? How can they be prevented from causing visual issues? This is where the Desktop Publishing Experts come in. Desktop Publishing Services include anything to do with formatting design optimization for different locales. They will:

Finally, every software localization project will include visual QA. At this stage, all the elements that influence the UX will be tested and confirmed. This includes graphics, numbers, formatting, and so on.

Linguists, localization engineers, designers, DTP experts, a special localization platform, QA tests… It sounds like a lot. But as you have seen in our previous points, each one of these elements is vital to ensure the localization process is fully successful. Software localization is highly collaborative; all have a part to play to deliver the best possible outcome.

The Solution: Centralize Your Localization Efforts and Connect with an LSP

If you are aiming for a full-scale software localization where every detail of the process is taken care of, it will be beneficial for you to connect with a Languages Service Provider (LSP). They will have an extensive network of professionals right at their fingertips and also leverage the most up-to-date translation tools that will make the more technical challenges a breeze.

Software Localization services involve a complex process of linguistic, cultural, and technical elements. For it to be successful, internationalization, localization, and Quality Assurance should be performed on a professional level. This means that in order to deliver the best possible product that connects with your end-user, you will need to rely on the enterprise of native language experts.

At Laoret, we only work with native linguists, tech-savvy localization engineers, and optimized translation and localization resources.

The Best Localization Practices For Your Unity 3D Game

Arabic Game Localization: Why It Matters And How To Get It Right

6 Ways To Prepare Your Multilingual eCommerce Platform For Black Friday

Laoret is a language service provider, uniquely poised to connect clients to virtually every corner of the world, and fully equipped to help them Read More!